NO TIME TO WASTE IN THE ‘FIX THE WORLD’ SWEEP STAKES

Years ago I worked for someone determined to earn a million dollars by age 30 (sounds modest now, but this was way before the dot-com explosion and Wall Street gone wild) — and do something significant to improve the world. One of my responsibilities (totally outside my role in the niche marketing company) was to assemble a file of potential “do good” projects. For every social action organization or endeavor culled from published lists, newspaper articles and brain-storming sessions I created an index card placed in a long box divided by category tabs: hunger, education, health conditions–many more topics than I recall at the moment.

At one point I conceived a grandiose project called “McDonald’s Feeds the World.” The tagline equally apt for a mega charitable initiative by the global chain and its business slogan pretty much explains the gist of it: it would combat hunger and it would be huge. 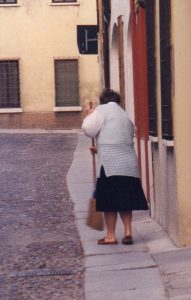 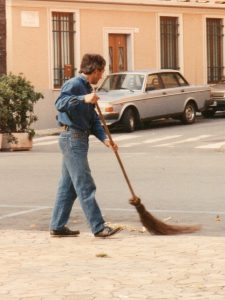 Then I read a bit of wisdom (credited to too many people to cite): “If everyone swept in front of his own door the world would be clean.” Start small, start local, start immediately.  Just as Anne Frank observed: “How wonderful it is that nobody need wait a single moment before starting to improve the world.” In other words, why waste time on elaborate business plans, acquiring approvals or producing promotional materials. Want to address hunger? Put a chicken in your hungry neighbor’s soup pot. 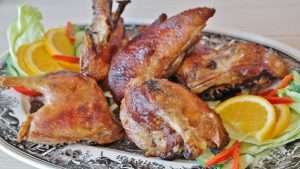 That’s exactly what Clara Hammer did. One day at her local butcher shop she asked why a young girl had been given bits of bone and fat. The proprietor explained that the girl’s disabled father, already substantially in debt to the vendor, couldn’t work to support his impoverished family; the scraps would add a little nutrition to their meager stew.

On the spot, Clara told the butcher to charge her account for two chickens and a pound of meat to be given to the girl every week. Soon she heard of other needy families in the community, and with support from her own provided for them as well. As the numbers (and butcher bill) rose, she alerted friends about the poor in their midst and began collecting funds to feed them.   For three decades, “the chicken lady of Jerusalem” ran the growing endeavor from her dining room table. 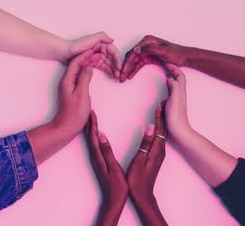 When she died in 2010 just shy of her one-hundredth birthday, because of her concern and actions hundreds of people were enjoying weekly meals. One of her three daughters along with one of her 35 great-grandchildren–she also left 40 great-great grandchildren!–maintain her legacy. Today the Chicken Fund of Jerusalem serves more than 250 families and 900 children.

Clara “The Chicken Lady” Hammer devoted herself to “changing the world, one chicken at a time.” (Talk about a great slogan!) Saskia Rechsteiner’s crusade started with something smaller. Perhaps not since the Dutch traded with American Indians for Manhattan Island has anyone used a few beads and pieces of fabric with as much far-reaching effect as the founder of Shanga.

Not that she’d set out to do anything more than show community spirit by participating in the 2007 fundraising Christmas Fair in Arusha, Tanzania. The cloth-covered bead necklaces she assembled for the occasion quickly sold out, but not before attracting attention from safari companies and resident ex-pats who wanted them as welcome gifts for clients and friends and family back home.

To help keep up with demand she hired a friend of one of her husband’s employees, a young deaf woman. While teaching Niwaeli to string the beads, Saskia learned that the country’s shunned disabled people often miss out on the education mandated for them by law–and therefore any kind of “normal” life–because their families hide them from public view.

She reacted to the revelation by converting an unused structure in a corner of the coffee plantation co-owned by her husband into a workshop employing several more deaf women. 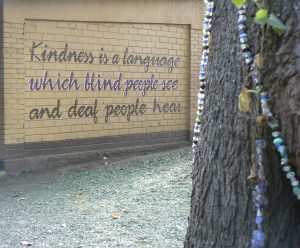 Purposely she established Shanga (Swahili for “bead”) as a commercial enterprise (not a charitable organization) designed to enrich the lives of greater numbers of individuals who cannot hear or walk. (No money goes to Saskia; earnings provide reinvestment for development of new products and artisans.) Today, scores of dignified and empowered “disabled” men and women engaged in meaningful work at Shanga are fully capable of supporting themselves and their families and functioning in society without shame or limitation.

I particularly and immensely admire people like Clara and Saskia, individuals who become aware of an on-going need, immediately start addressing it almost without thinking, take not a penny (or agora or senti coin) for their efforts and end up having engendered an endeavor whose reach extends much further than their original intent or, I expect, wildest expectation. 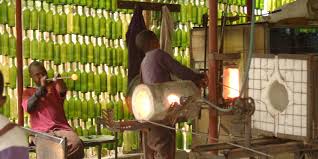 Clara expanded her giving to school supplies and clothing. As word of her modest operation spread around the world, it inspired people in many countries to help support it, and consequently help more people. Because of Saskia and Shanga, Tanzanian attitudes toward a previously feared and forgotten population changed dramatically. And inadvertently generated concern for the environment in a place with, in Saskia’s words, “zero culture” for it: The glass furnace installed to economically manufacture beads in house spurred a recycling effort. 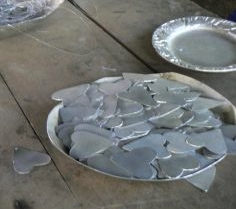 Both led to growth for Shanga: The reclaimed bottles, aluminum pots and other items provided materials for additional lines of fine quality crafts, showcased and sold in the gallery. (The charming restaurant opened as part of the creative oasis attracts greater numbers of visitors to watch the artisans at work and buy their creations. More revenue, more jobs. From a little seed–or in this case bead–indeed.)

To be honest, I envy these women and people like them for their easy recognition of another’s plight, quick response, modest objectives, perseverance (to be sure they experienced sleepless nights as they worried about being able to continue supporting people who had come to rely on them for sustenance), for their accomplishments initially unanticipated and unplanned and as a result all the more impactful, well beyond their own front doors. 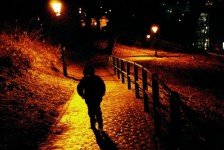 I picture the “broomsticks” used to achieve that kind of improvement as simultaneously handles for the bristles at their base, and support poles for lanterns on their top ends. Imagine them out up and down house-lined streets at dusk, put to work on stoops barely wider than a doorway, throwing circles of light merging with each other and obliterating the dark spots between them.