MARCHING OUT OF AUSCHWITZ: REMEMBRANCE AND DEFIANCE 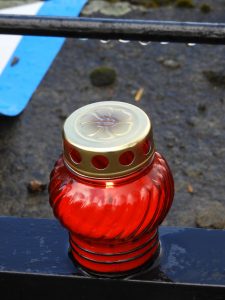 The bars over the broken steps down into the shattered hell that had been an Auschwitz death chamber seemed to be shedding tears. Residue of rain (and snow and hail) earlier in the day, the droplets quivered over candles lit and mini wooden grave markers placed in memory of loved ones lost to Nazi depravity in that obscene place. But never to be forgotten–as proclaimed on yellow stickers affixed to the ubiquitous official jackets worn by more than ten thousand participants in the following day’s centerpiece of the March of the Living (MOL) itinerary.

The annual educational program brings (primarily) high school students and (also several thousand) adults from every part of the world to Poland and Israel for a two-week eye-, mind- and heart-opening journey. It revolves around the three-kilometer Yom Hashoah (Holocaust and Heroes Memorial Day) march of those thousands out of Auschwitz under the Arbeit Macht Frei gate, beside railroad tracks and through the streets of Oswiecim (the original Polish name of the place) to Birkenau (Auschwitz II, the bigger, more efficient murder factory) for a throat-gripping ceremony. 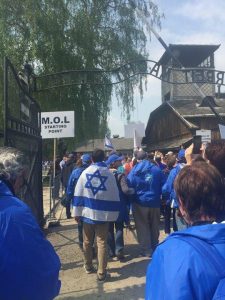 March of the Living–what a fantastically defiant retort to the brutal death marches the retreating Nazis forced staggering concentration camp victims to make. What a remarkable sight, the throngs of Jewish teens, a pulsing sea of blue jackets and blue and white Israeli flags flowing cape-like over backs and held aloft against the sky–all these vibrant young people who, per German National Socialist ideology were not supposed to exist. But there they were, proud, the next generation of witnesses to the attempted annihilation. They have heard first-hand accounts from the survivors traveling with them, and when no survivors remain will testify to the unrelenting evil perpetrated. Former marchers (more than a quarter million to date) will defend against denial and protect from extinction the flames of memory. 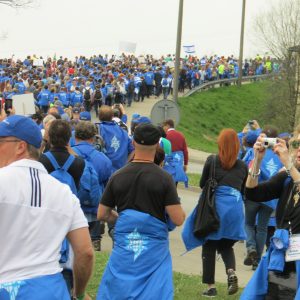 Recently I had the privilege of participating on my third consecutive march and still marvel at the overwhelming vista. Going the first time had been a goal from the moment I learned about the trip; hearing, reading and seeing anything Holocaust related has always strongly impacted me. But when the March of the Living was initiated, I was already too old by half my lifetime to participate in a program then only for adolescents. 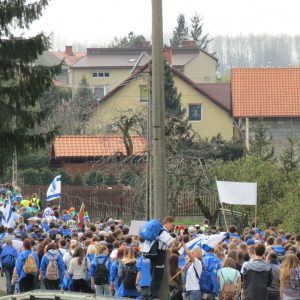 When my chance finally came three years ago, I went expecting the trip, like visiting Poland, to be a once-in-a-lifetime experience. Yet at its conclusion I realized I had not yet experienced enough. So when invited to return as an adult leader (“bus captain”), I excitedly accepted without the slightest idea how demanding the role would be. I leapt at the opportunity as for a treasured gift, a chance to enhance my knowledge of a disturbance that I know to be fact but still find (increasingly, believe it or not, as I learn more of the execrable details) so barbarically astonishing it is almost impossible to believe occurred.

Friends and family often ask how I can repeatedly subject myself to the horrors and pain, how I can venture again to the largest Jewish cemetery in the world, a place in which so many Jews refuse to step, as well as to other camps, ghettos, cemeteries and sites of mass murder. 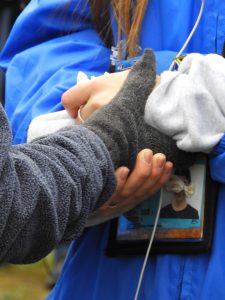 Yes, many tears are shed during the journey, and don’t end when we leave Poland. (The week in “the miracle on the Mediterranean” provides its own emotional roller coaster through a powerful combination of commemorative days, the juxtaposition of and transition between Yom Hazikkaron [Memorial Day]–a solemn occasion almost universally observed in a nation in which loss through military service or act of terror touches virtually every family–and joyfully festive Yom Haatzmaut [Independence Day]. 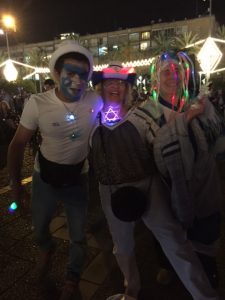 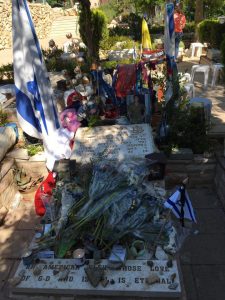 The second would not be possible without the first, and so Israelis gratefully recognize the ultimate sacrifice of more than 23,000 primarily young men and women. Then, as evening dissolves into night, they gradually rise out of dolor and literally dance in the streets under bursting fireworks.) Perhaps I embrace the emotion as a small price to pay for the privilege, and welcome its expression as part of the responsibility, of being a Jew, especially at a time and place easy to live as one proudly. 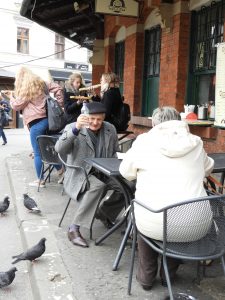 A Krakovian saluting us–“Mazel tov!” as we walked through a market square

As for venturing onto Polish soil, one of the revelations during my first March was the lengthy and complex relationship between Poles and Jews, one that began with legal protection for the minority, was at times undeniably brutal but also provided opportunity to flourish. Yes, the church preached anti-Semitic bile. Yes, Poles collaborated with the Nazis, sometimes willingly furthered their objectives. Yes, anti-Semitism still exists, especially outside metropolitan areas.

And yet, Poland can boast of a resurgence of appreciation for Jewish tradition–and Jews, in history and today. The new Polin museum in Warsaw vividly and creatively showcases the thousand years of rich Jewish life in the country. Non-Jewish students major in Holocaust Studies at Krakow’s Jangiellonian University, accompany adult groups to the concert-hall ceremony on the eve of Yom Hashoah (this year featuring education ministers of several European nations dedicated to furthering knowledge and understanding of the Holocaust and its lessons), and join us on the march. 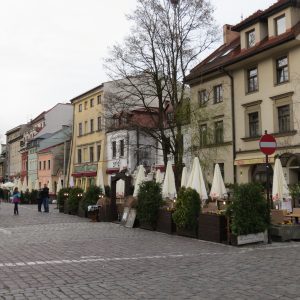 Rubenstein’s, Jewish Restaurant and Cafe and Ariel in Kazimierz

The former Jewish quarter of Krakow–Kazimierz–dotted with historic synagogues lavishly restored (and operating), serves as the local evening hot spot, lively with Jewish- and Israeli-named restaurants featuring Jewish-style (if not kosher) food. The world’s largest Jewish Culture Festival, produced by non-Jews primarily for non-Jews, takes place in Krakow every spring.

Young Poles think it’s “cool” to be Jewish–and more and more people “every day,” we are told, are discovering they are, many of them deciding to explore their heritage (concealed by concerned parents and grandparents in the aftermath of World War II and under the constraints of Communism). 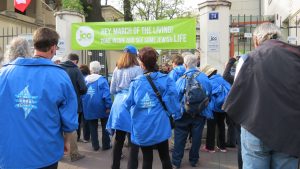 They can do so through a hotline maintained by the Jewish Community Centre, a dynamic hub of Jewish learning, living and revival.

And more citizens of Poland than of any other nation have been recognized and honored by Israel as Righteous Among the Nations: individuals who without financial gain endured significant risk of death to save Jews from the Nazis. 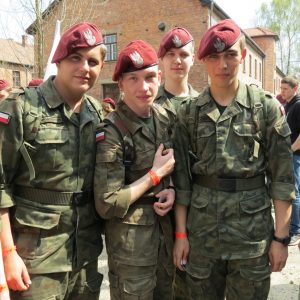 We were privileged to meet with one during the most recent trip, delicate white-haired Paulina. She, an adolescent during the war, and her parents must have heard different sermons from their priest than did many of their compatriots: devout Catholics, they never hesitated to feed the hungry Jewish children who showed up on their doorstep, secure hiding places for a number of Jews, arrange passage out of the ghetto for a mother and daughter, ensure that all had adequate food and medical supplies. . . They may have feared, but for them there was never a question about whether or how to act; their moral core and fortitude would not allow otherwise. Because they refused to take advantage of or ignore their neighbors’ plight, several families survived into succeeding generations. 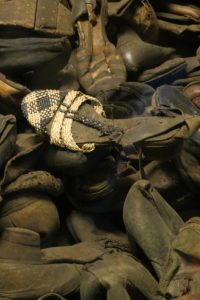 In the exhibition room in the Auschwitz barrack displaying mounds of footwear stolen from the victims, we were advised to focus on just one shoe, and think about the person to whom it belonged, his age, her status, where s/he was going–work, school, synagogue, playing field, a special celebration–when so cruelly cut off from their destination; to leave the abstract notion of piles, tons, millions and return to a single human of incalculable worth–the way Paulina and her family regarded each endangered Jew. The way we need to rethink our programmed response to Poland. 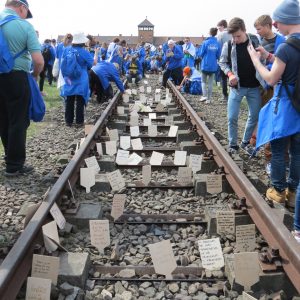 Seeing all people as individual human beings, with anguish and apprehensions and aspirations like any of ours fulfills a key objective of the March of the Living, recognition of the roots–and prevention–of prejudice, intolerance and hatred.   On their small wooden memorial paddles, instead of the names of murdered relatives, or the children in whose names they march, some students write, “It could have been me.”

It is at once a sobering and empowering realization that applies to both sides of the confrontation.   Each of us can only hope and pray that if, heaven forbid, we were caught in a situation such as those faced by the victims and their potential rescuers we would see–or be–the saving glimmer in the dark. 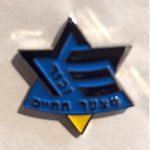 The Hebrew words mean “Remember” and “March of the Living”

Next year is expected to be an especially big year for the March of the Living (April 8-22, 2018), marking the 30th anniversary of the life-affirming and life-impacting journey,  70th birthday of Israel, and 75th commemoration of the Warsaw Ghetto Uprising. You don’t have to be a southerner to travel with the best and most experienced educators who staff my region’s delegation (www.molsouth.org). Find out about other domestic, as well as international, delegations at https://motl.org.