TOKEN OF APPRECIATION OR OPPROBRIUM?

"A great man is a torch in the darkness, a beacon in superstition’s night, an inspiration and a prophecy. " 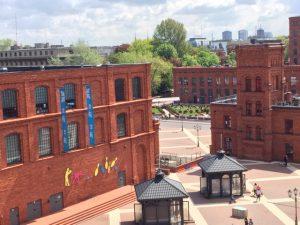 Our group leader challenged us to find a particular souvenir during our impromptu stop at Manufaktura. But he provided no description or clues about where to look for it in the massive shopping/ entertainment/ educational complex in Lodz, Poland.

The unplanned respite occurred during my first March of the Living experience (see previous post, “Marching Out of Auschwitz”).  It may seem incongruous for such a trip, especially sandwiched, as it was, between two heart-searing experiences: learning about the “give me your children” speech while standing at the Lodz ghetto site where in 1942 Chaim Rumkowski, controversial head of the Judenrat, delivered it (http://www.holocaustresearchproject.org/ghettos/rumkowski.html), and entering the cattle car at Radegast Station, departure point to death camps (now a memorial). 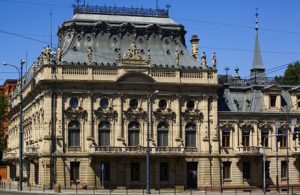 The unexpected addition to our itinerary actually provided an integral piece of the Holocaust puzzle, one increasingly emphasized today in education on the subject: pre-war Jewish life (much of it good) and contributions to Polish society. You see, Manufaktura originated as a textile factory built by a nineteenth-century Jewish industrialist and philanthropist, Izrael Poznanski. Starting without financial advantage, he became incredibly wealthy, and generous. In addition to creating an extensive manufacturing empire and several palatial homes, he built residences for his workers, houses of worship for Christians and Jews, and hospitals for each religious community. 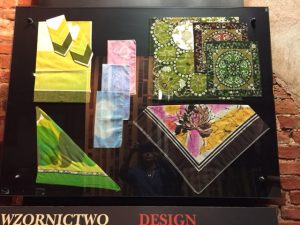 Some of the fabrics produced in the factory

Operations at the plant continued long after his death and the emigration of his descendants, through both world wars and nationalization under the Communists. Even after bankruptcy closure in 1992, the historic facility was recognized as one of the four most important monuments in Lodz. (Poznanski Palace, today the city museum, is another of the quartet.) A decade ago, investors brought it back to life as Europe’s largest mall, preserving the stunning brickwork of the entry gate and parts of the exterior, rows of workers’ homes and, in the Muzeum Fabryki (Museum of the Factory), elements of the foundation and inspiration for the multi-faceted attraction.

It was somewhere else at Manufaktura that a member of our group discovered the particular souvenir we’d been charged to identify, and when we reassembled the leader asked what we thought of the item he held up for our inspection. 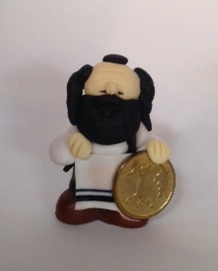 How would you regard a small figurine of a traditionally dressed religious Jew clasping a grosz coin (Poland’s penny)?

Many of my traveling companions saw it as I initially did: an anti-Semitic caricature of the stereotypical greedy Jew. No, our leader explained, it’s actually a token of good fortune, the wish of its owner to be able to turn a penny into a Poznanski. People of all backgrounds–Jews, non-Jews, locals, tourists–treasure these figures (originally carved of wood, now also formed of polymer clay). Our Polish guide–one of the young people who discovered her true heritage (amazingly after she made the decision to convert to Judaism)–announced that she has one in her home.

Despite searching during the remainder of my time in Poland, I could not find an alternative as a small gift to bring for each of the grammar school students in the class where I volunteer once a week. But even after purchasing the little Jewish men, I worried that the parents might not approve. So I put together a brief story–told in class and sent home with the children–about Poznanski and the good luck charm. 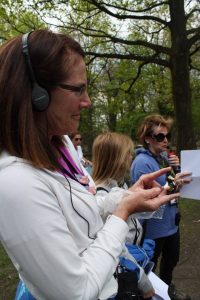 Me in the background reading “Poznanski’s Penny” in front of the industrialist’s gravesite, while a 2016 March participant holds one of the tokens

One of the teachers encouraged me to “do something more” with it. Eventually Poznanski’s Penny–The Absolutely True, If Largely Forgotten, Story of the Polish Jewish King of Cotton emerged (more via the “Written Works” tab above).   Early readers (not all of them my nearest and dearest–honestly!) provided enthusiastic response. They, like I, thought it had potential as a fun illustrated book, a gift item (particularly paired with one of the token figures), a teaching tool–and souvenir of a visit to Manufaktura, particularly the Muzeum (which sells books at its gift counter).

The director of the facility agrees, and has been approaching potential partners to joint venture publication. Recently she reported encountering an understandable obstacle: the attitude that the figurines reflect the ugly past of Polish-Jewish relations. Yes. Perhaps. And on the other hand. . . 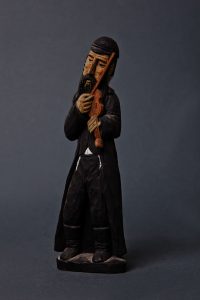 She suggested I look at www.luckyjews.com. The fabulous website preserves the fabulous exhibition Krakow’s Ethnographic Museum devoted to this issue in 2013. On it you’ll find the gamut of evidence and opinions. Asking obvious questions (“Do these images express affection, ridicule, fascination or mourning?” “Do they divide Poles or tie them together?”) as well as surprising ones (“What magical powers do they have?” “Do they allow us to communicate with ancestors?”), the exhibition placed the modern iteration of representative Jews (the coin was added less than 20 years ago) within the context of a history of carved folk art figurines depicting many types of people and professions dating back to the seventeenth century. 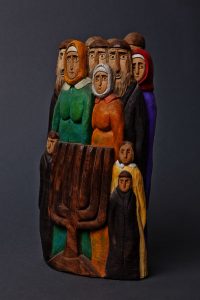 Without question some are blatantly anti-Semitic. Yet consider that even when based on stereotypical views (such as the association of Jews with wealth, fertility and magical powers) the figures were not necessarily derogatory. For instance, among people-shaped beehives (soldiers, monks, biblical characters. . .), ones of Jews were particularly popular due to belief they would result in large amounts of honey. The selection of carved toys sold at Easter markets traditionally included Jewish figures because Jews were as much a part of Polish society as bishops, women in costume and chimney sweeps (also represented, among many other groups). After the post-war reappearance of the carvings in the l970s during a handicraft revival, it was Jewish figures Poles chose to display their opposition to communism, their awareness of the nation’s lost multi-cultural past having been spurred by Solidarity. 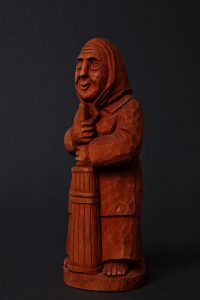 Some of the religiously and nationally diverse visitors to the exhibition shared this nostalgic view, seeing the figures as reminders of the lost Jewish culture that had been part of Polish life and shared history. “They are nice,” wrote one, noting that they show coexistence. Others not as sanguine described them as offensive, repulsive, racist, ridiculous, ugly and in poor taste.  One mentioned having a similar initial response that changed with exposure through the exhibition to a more varied, even at times respectful, picture.

But I’d like to know what you think.   Seriously–please add a comment or send me an email. Do you see the figurines as positive or negative representations, as expressions of longing for part of Poland lost or mockeries of people considered good riddance?   Is your view the same now as initially after you read the description of the figurine above?   What, if anything, changed your opinion? 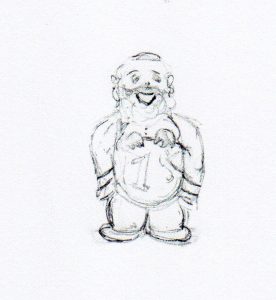 You’ll recognize why one comment in particular from the exhibit resonates for me: “The figurines are fun, they put you in a good mood. They are connected not only to wealth, but to hope.” My light-hearted Poznanski story,  which subtly touches on lessons in history, hard work and helping the less fortunate, ends exactly with that: a message of hope. And my version of the “little good fortune Jew” bringing positive wishes to the recipient is a sweet cheerful fellow.  (Do you agree?  That’s my rough sketch of him at left.)

There is no denying the historically derogatory linkage of Jews and money. Yet the association has also engendered admiration and the desire to emulate Jews’ success. Certainly both attitudes can (and did) exist simultaneously.

And meanings and attitudes change over time, sometimes into their opposites. For example, centuries ago something described as “terrific” would have filled us with terror; now we recognize a “terrific” occurrence, object, person or idea as marvelous, excellent, fantastic! 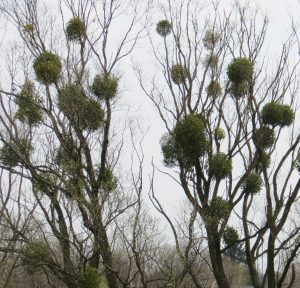 Mistletoe (this is how we saw it growing in Poland) once represented death and, ironically, castration, not the promise of romance it now signifies.

Regardless of the initial intent or understanding of the Jewish tokens, can’t they have different significance today?  Might    they, for instance, be regarded within the context of the resurgence of appreciation for Jews and Jewish culture occurring in Poland–in other words, favorably?  I’m certainly hoping decision makers in Lodz will ultimately see them in that light.