Anti-Semitism, Other Hatreds, and The Book of Esther’s Eternal Truth

"And the Jews had light and gladness, joy and honor . . " 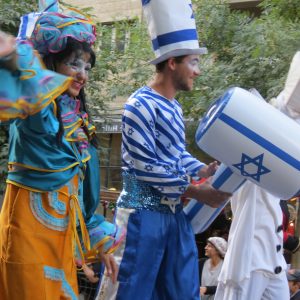 Anyone exposed to the news and hateful social media posts might find the featured quote incongruous with the situation in today’s world. What’s to cheer in the return of virulent anti-Semitism, vows to destroy Israel (and abided progress on developing the weapons to do so), Jewish cemetery desecrations, waves of bomb threats targeting Jewish communal facilities. . . ? (Not to mention attacks on mosques, shootings of immigrants, expulsion and murder of Christians in Muslim lands, too many heinous acts against “others”–all of which also affect a people that is not supposed to be content as long as oppression and suffering afflict anyone. Remember, a Jewish sage originated the “Golden Rule”: Challenged to teach a would-be convert the entire Torah while standing on one foot, the first century BCE Rabbi Hillel said, “That which is hateful to you don’t do to others. [The rest is explanation. Go and study.]”) 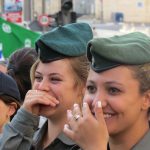 Yet the quote is in some ways surprisingly apt. Believe it or not, last year Israel ranked 11th happiest out of 157 countries! (Millennia of failed attempts to rid Earth of Jews have only strengthened our optimism.) The quote is also timely, in part because it will be recited in synagogues world over this coming Saturday night and Sunday morning, in observance of Purim. The account surrounding the highlighted line, the biblical Book of Esther written by and for Jews, reflects the truth of their existence (and threats to it) throughout the ages. 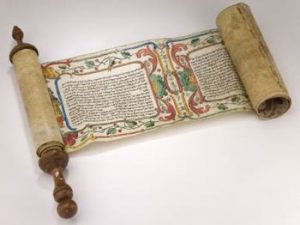 An example of an antique illuminated Megillat Esther* from Breslov.org, which inspects, repairs and writes new copies of the text

But I maintain that it holds strong relevance far beyond that particular people. (You’ve probably heard Jews referred to as “the canary in the coal mine.” Like with the unfortunate bird that by succumbing to toxic gas warns miners of danger, what happens first to the Jews will come to befall others.) At the time the recorded events occurred, reckless action, incomprehensible madness, and disrupted moral order seemed to have turned the world upside down. Sound familiar? 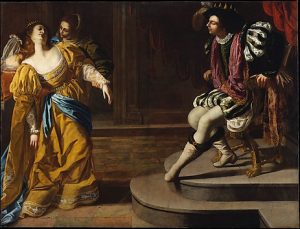 For those unacquainted with the story behind the holiday: In ancient Persia, the closest advisor to King Ahasueros, Prime Minister Haman the Agagite, convinces His Majesty to order the extermination of the entire Jewish population–“a certain people” that is a scourge on the empire, he claims. Esther, who became queen by essentially taking first prize in a kingdom-wide beauty contest (and remains secretly Jewish per the insistence of her guardian Mordecai), intercedes to save her people. (And then, as the summation of every Jewish observance concludes, they eat.)

Until I started really delving into Jewish study as an adult, aspects of the Purim story bothered me. Not just the fantastic embellishments that help make the tale so engaging for children (sages’ flights of fancy resulting from their reading between the lines or emphasizing spiritual points). In the spare telling–approximately 3200 words (per Google; I don’t have time to count) the figures struck me as one-dimensional and aspects of the conflict’s resolution illogical. But then I learned that biblical personages, portrayed as they are with all their faults and imperfections (prime example: that flawed paragon King David) are role models precisely because they–like all humans–make mistakes and behave badly. So I started looking at Esther et al as real people operating in a world governed by nature and physics–and realpolitik.

I pondered the psychological and emotional life of the lauded heroine, forcibly taken to the palace, subjected to an existence she never wanted or expected for herself, pressured to risk her life for others; I contemplated the clashes of personal ambition and conflicts between worldviews that would explain those seeming irrational developments. My exploration resulted in Esther’s Will, a novel revealing the depths of the Book of Esther. 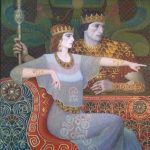 Yes, “Rosi” is not the only manuscript that could be the subject of the “mis-adventures” blog I did not create, focusing on the exhausting, occasionally validating but most often punishing process of trying to get a book published. (Unfortunately, so far none of the tremendous positive feedback I’ve received has come from a professional in the position of taking it to print. So for more information or to read any of it, click on the “Written Works” tab above. The button under the “Esther” blurb opens a page that includes a couple short excerpts. By the way, you’ll find the same for “Rosi.”) 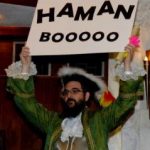 At its core, the Book of Esther (like Esther’s Will) shows what it means to live in a godless society. It doesn’t matter how you conceive or define God–as the force setting in motion action on Earth (and in the universe), as the all-powerful being intervening and interceding in individual lives, as the measure of ultimate potential or model of perfection, as nature. . .   A godless world (or the godless existence of an individual), lacks the ego-checking recognition that there is something greater than the self, that “I” am not the be all and end all. To be godless means there is no standard of behavior to aspire toward, no inherently truthful set of morals (like intolerance for murder ), just relativity, my rules as valid as anyone else’s, might makes right rather than responsibility.

I’m sure I don’t have to connect the dots for you to see the pertinence of this ancient tale to today’s horrific conflict between civilization and barbarity. Or to the enduring duty we have, individually and collectively, to recognize, acknowledge and combat the evil of fanaticism that would destroy all differences, all minorities, every aspect of life we cherish. 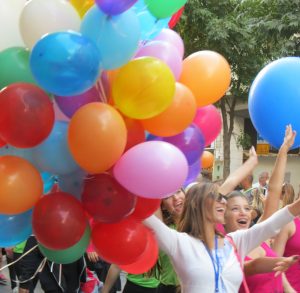 One interesting aspect of the assertion about the Jews having “light and gladness” is that it doesn’t come at the end of their ordeal, once the genocide has been decisively averted, but earlier when the condemned, still subject to the decree of annihilation, experience a glimmer of hope: after the king’s promotion of Mordecai and granting of permission for the Jews to defend themselves and battle anyone out to destroy them. We have a tradition of recognizing every small step toward an as yet unmet goal, the incremental accomplishment that keeps focus on the path. (Not to mix up holidays, but this is the theme of the Passover favorite “Dayeinu”–“it would have been enough” [to get just this far. . .and then that far. . . ]). Why not recognize and celebrate every reason for sustained hope?   It also indicates ultimate faith in a positive outcome.

The full line from Megillat Esther* is included on one occasion other than Purim: in the Havdallah (“separation”) ceremony conducted by observant Jews every Saturday night to mark the distinction between the sacred time of the Sabbath and the return to a regular weekday. (A ceremony, I have to mention, conducted around a special double [or more] wick candle.) To “The Jews had light and gladness, joy and honor,” Havdallah adds, “So may it be for us.” 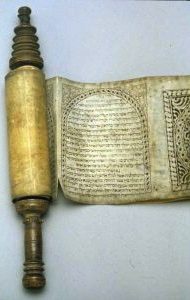 *In Hebrew, the name of the text–Megillat Esther–means Scroll of Esther, for its original form. Although one of five scrolls (megillot) in the Hebrew Bible (with Song of Songs, Psalms, Ecclessiastes and Ruth), Esther is often referred to simply as the Megillah (ie: “The Megillah reading will start at. . .”). From the collection of Magnes Museum

History and current events tell us that attempts to destroy the Jewish people (individually and collectively) are not just in the past. That is what gives the Book of Esther its enduring relevance. But attempts to obliterate “a certain people”–be they Tutsis, Yazidis, Arab Christians, moderate Muslims. . . have obviously not stopped with the Jews alone. While we pray for the “light and gladness” to “be for us,” may we also help it be for all. There’s a lot to be done. And a candle doesn’t light itself. 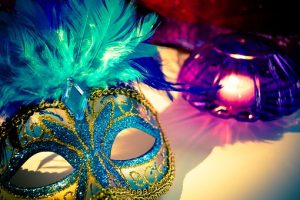