" At times our own light goes out, and is rekindled by a spark from another person. " 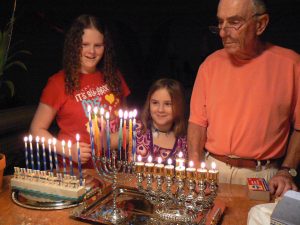 My nieces and husband enjoying the eighth night several years ago

Although we’re Jewish, my family always had a celebration on Christmas Day–because it happens to be my mother’s birthday (happy birthday, Mom). Often we would drive from our house on Long Island to my grandparents’ apartment in Astoria, Queens, for one of my Nana’s (grandma Irene Lowinger, of blessed memory) lavish meals. A favorite part of the day for me was the drive home along Northern State Parkway, past buildings and branches adorned in multitudes of colored lights, those dancing specks of festive incandescence the only things clearly discernible in the dark. I could never see enough of them, and year after year I looked forward to the displays.

I hope it’s not revisionist personal history to say I didn’t miss having them at our house, because we had our own source of festive incandescence: the Chanukah menorah (properly called, I later learned, chanukiyah). It was especially magnificent on the eighth night, the expansive illumination from the full array of candles filling the room. Perhaps it is the memory of that image of radiance that draws me to light in all its glorious symbolism.

So how appropriate for me to be launching this endeavor–Illuminating Lives–just as we start this year’s celebration of the “Festival of Lights.”   The holiday originated following the victory of a weak, untrained, ill-equipped band of Jewish fighters (the Maccabees, led by the five sons of Mattathias) over a massive professional well-armed military force (the Hellenistic Syrians whose king had outlawed Jewish practice).   It commemorates the rededication of the Temple in Jerusalem that had been desecrated by the Syrians–and specifically the rekindling of the seven-branched menorah that was supposed to be kept lit perpetually as a sign of God’s presence/essence in the world. The “miracle of oil” story we learned as–and continue to teach to–children is not exactly the way things developed (email me if you’d like the low-down on the political and religious considerations behind the story and what really happened circa 165 BCE). But it can’t be beat as metaphor: 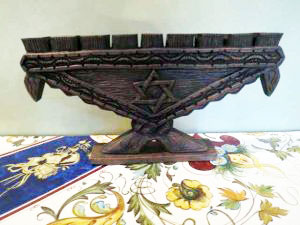 At perhaps the darkest moment of Jewish history (to that date), when it looked as though Judaism would be extinguished, the Maccabees found the fuel (commitment to their heritage and willingness to defend their values) to keep the lamp lit (preservation of religious freedom and observance). The undiminished oil was Mattathias himself. With the spirit of Judaism continuing to burn in him, he reignited faith and fight in his fellow Jews.

What Chanukah is truly about–the struggle to keep light shining in the world–is the core of Judaism and, actually, all of human history: the unrelenting effort toward triumph of the light of good over evil, knowledge over ignorance, hope over despair. . .in short, the essence of existence. (Is it anything short of brilliance–no pun intended–that the very first element brought into being, by the very first words attributed to God, was light [Genesis 1:3)]? Without it there is no life–plant, animal or human.) 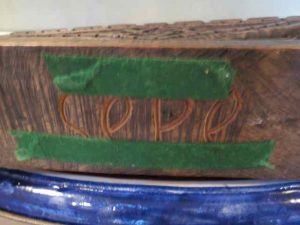 In observance of the holiday this year, the chanukiyah I’m using is the hand-carved wooden one I impulsively purchased in the silent auction at a recent fundraiser for the March of the Living (more at a later date on the annual journey to the death camps in Poland coinciding with Yom HaShoah, Holocaust Remembrance Day). The description said “antique”, but I haven’t been able to get any further information about it.

That’s it,  pictured above. (The photos to the left are of the inscription on the bottom partially obscured by 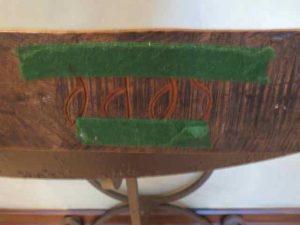 protective felt.)  If anyone can throw any light (can’t get away from it, can we?) on its origins, I’d appreciate hearing from you. I’m very much looking forward to seeing the flames, dancing in glass holders, fully ablaze on December 31, the last night of this Chanukah, coincidentally ushering in a hopefully bright 2017.

Hope is what the lit chanukiyah symbolizes so powerfully that even in concentration camps Jews kindled them, using ingredients smuggled in and hidden, bribed from guards or stolen from kitchens. Thanking God for the miracle of Chanukah, they wanted to believe–they fervently hoped–another miracle was possible.

Their actions exemplify Albert Schweitzer’s words: With those lights set aglow surreptitiously at the risk of immediate death, people enduring unspeakable conditions sparked hope in others, often hope that had been fully extinguished. Like the Maccabees, small in number, who risked their lives against a massive force, victims of Nazi brutality who fought back if “only” psychologically and spiritually believed that despite the death of individuals, the Jewish people would survive.

With that in mind, I understand Albert Schweitzer’s words in another way, as well: The light of a person that goes out because a life ends can be rekindled by someone else carrying on values, retaining shared memories and preserving stories of the deceased.

Which brings me to Rosi, a soon-to-be-100-year-old Holocaust survivor and the initial impetus for this project. But more about her next week.