THE SUN, THE MOON, AND THE HUMAN HEART

By Lesli Koppelman Ross
Posted September 3, 2017
In Bringing light to the world, Reflections
1
0

"See the light in others and treat them as if that is all you see. " 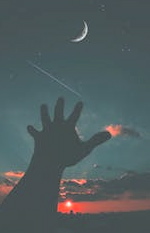 Many of us just learned for the first time about an amazing convergence of circumstances: The moon is exactly the right distance (400 times closer to Earth) and exactly the right size (400 times smaller than the sun) to be able to block from view the ball of our star while revealing its brilliant corona. What luck for those fortunate enough to witness the complete concealment. 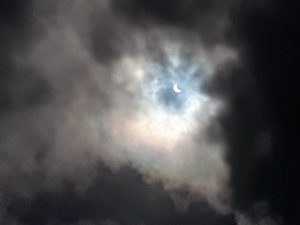 The elipse in progress in Florida, captured on cellphone by Rob Kunz

The most I got to experience of the “historic” cross-country eclipse was the shape it cast (onto paper on the ground) through a pinhole during 80 percent obscurity (the maximum here in south Florida).   Yet even that small image–much of the dark circle of the moon covering all but a thin crescent of the sun–thrilled me. And after seeing broadcast news, hearing first-hand reports from one of my granddaughters in position for the totality in Oregon, and watching a Ted talk  by an eclipse evangelist (or, to be technically correct, umbraphile) I am determined to be properly equipped and in position to experience this marvel of nature at its next appearance (in 2024). 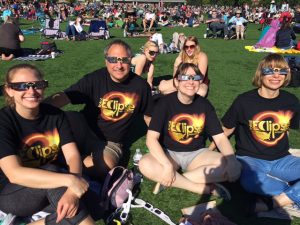 Members of my family watching in Oregon

From the media coverage, two things particularly impressed me about the event: Asked to describe what they had seen, viewers one after another used the same word: “awesome!”   An overwhelming sense of reverence and admiration affected every one of them, a feeling that perhaps causes one to gasp, to perhaps freeze in place, fully in the moment, suffused with wonder and appreciation.   And perhaps matching the scope of the vista in space with an expansiveness of heart–exactly what we saw on display among the masses of strangers gathered in fields and stadiums, on streets and rooftops throughout the country. (I’ll come back to this in a moment.)

Of course awesome also means an overwhelming sense of fear, exactly the emotion that struck ancients awed by the eerie sight. In response, some peoples ages ago raised a ruckus and threw objects at the sky in attempts to scare away the heavens-roving bear or dragon devouring their life-sustaining source of light and heat.   Those who saw in the unexpected occurrence the wrath of (Greek) gods determined to destroy the world, or the hand of a displeased God warning His Creation to shape up probably shrieked no less, anguished as they anticipated imminent doom. 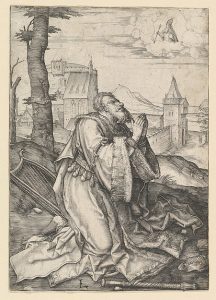 Then they resolved to repent their evil ways. If only today the brief disappearance of the sun would end years-long wars (as happened between the Lydians and Medes 600 years before the Common Era)! Or inspire a society-wide commitment to better behavior, as it did among our ancestors in times of greater religious adherence.

Then again, that spirit of acceptance, good will and mutual concern is precisely what seemed on display on August 21: People of diverse backgrounds, beliefs, proclivities and politics calmly occupied the same public spaces, shared special glasses and other provisions for the occasion, and their marvel.   This second aspect of the response to the celestial choreography that so impressed me showed up again the following week–unfortunately, in a not-as-welcome manifestation of nature’s force. (Imagine the reaction of earlier peoples to a hurricane with the destructiveness of Harvey bashing the earth so soon after the temporary obliteration of the sun.)

As the storm ceased to cease, citizen rescuers streamed to flooded neighborhoods solely to save strangers, paddling their private boats up and down inundated streets and carrying the stranded to shelter. Observers commented on the strength of Houstonians and Texans.  Residents of a great city and great state, they pulled together, they were caring and resilient, they are special. . . .

Perhaps we would hear such accolades about any city or state so affected. Certainly it is not just Texans who rise above flood waters, but also Louisianans, and Floridians, and New Yorkers and New Jerseyans–Americans–(for isn’t our generous nation one of the first to respond to disasters anywhere in the world?).   Yet those expressions of such intense local pride made me think about how limited to the small groupings closest to us our concern often remains. 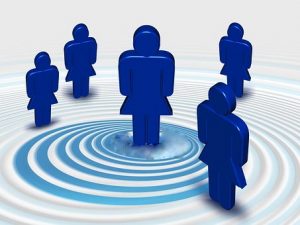 And that brought to mind the “Universe of Obligation” discussed in a fabulous Facing History and Ourselves seminar I had the extreme good fortune to participate in this summer.     (The presenting non-profit educational organization [“people make choices; choices make history”] provides extensive resources for educators to use in guiding students to engage with history in ways that relate to their lives–so that they develop the critical thinking and ethical judgment that ultimately promote moral decision making. Whether or not you’re an educator, I highly recommend taking a look at their thought-provoking material. 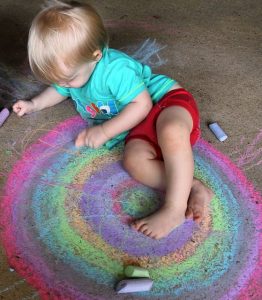 The “Universe” consists of four concentric ovals.  The name (or identification) of the individual to whom you feel the strongest obligation goes in the center. (Usually it’s oneself; it could be another–for instance, one’s child.) In each ring moving out you include the people (or groups) to whom/which you feel successively less obligation. Who isn’t in your “Universe” at all? Obviously no individual can care about or for everyone to the same extent. Does that mean you ignore anyone or any group not “in” any of your circles?   Or do we (or ideally should we) all have a moral, if not material, obligation to any and every fellow human being?

Why does it have to take a once-in-a-lifetime celestial show, or a 500-year flood for us to respond to each other solely as such? (No one bothered about affiliation, orientation, nationality, religiosity or any other divisiveness before lending a hand.) We all look up at the same sky, we all experience the same sense of wonder or worry. Just think: for the moments spent heaven gazing, or battling flood waters, the sounds heard were sighs and cheers, and pleas for and promises of help; we weren’t shouting at (over, around, past) each other. 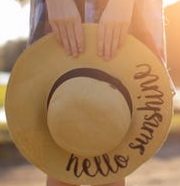 At the start of that Facing History seminar, our group wrote a contract of sorts (as a teacher would do in a classroom), a list of conditions all participants agreed to follow to ensure an environment conducive to sharing and learning together. Who wouldn’t want to see one of them in particular (my favorite) broadly implemented in our society: “assume best intentions” of anyone contributing to the discussion.

Maybe we need a kind of eclipse glasses that would work for our earthbound views, blocking out everything that prevents us from clearly seeing each other’s light, and each other in the best light.