An Unexpected Visit to Berlin

"The sun will rise and set regardless. What we choose to do with the light while it’s here is up to us. Journey wisely." 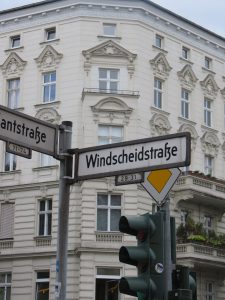 During a brief stopover in Berlin several months ago, I was already mulling the idea of starting a blog prompted by my (as yet unpublished) book about Rosi (the survivor who entrusted her story to me [see the post “Casting a Broad Light”]).  The possibility gave me added incentive to seek out the street where her mother had owned an apartment house.

Windscheidstrasse sits west of Tiergarten park in the district of Charlottenburg, a once prime residential area and the center of West Berlin between the end of the war and dismantling of the wall.  On my map it seemed a short distance north and west of the alluring shopping avenue Kurfurstendamm (known as Ku’dam–the eastern end of which was the site of the 2016 Christmas market terror attack). 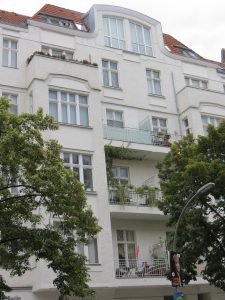 As with so many other details, Rosi could not tell me the number of her mother’s property. I had to be satisfied wandering up and the down the elegant street, photographing for her some of the grande dame buildings bedecked with architectural embellishments.

Rosi had never ventured to Windscheidstrasse.   The one time her mother delighted her with a trip to Berlin they had spent their time shopping, watching a theatrical performance from the best seats and treating Berta’s local attorney to an expensive meal–luxuries not normally indulged by faithfully frugal Berta.  The daughter remained unaware of the motivation for the excursion until they prepared to return to Vienna and Berta instructed Rosi to layer the exquisite newly purchased lingerie under her clothing to avoid having it confiscated at the border. By Nazi decree, Berta could no longer take money from Germany so she had decided to spend it all there.

It is difficult for me to imagine visiting Berlin without trepidation at that time, after both the Bebelplatz book burning and introduction of the Nuremberg Laws that progressively worsened life for Jews. Yet Rosi, always sheltered from troubling developments (signs barring Jews from many establishments notwithstanding), experienced the trip as a carefree extravagant spree in the company of a woman she adored and trusted to keep her safe. 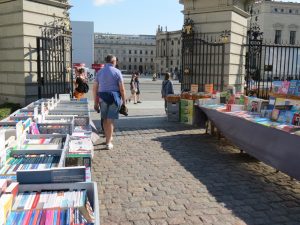 Opposite Bebelplatz, books for sale–including one that influenced Rosi, Arthur Schnitzler’s FRAULEIN ELSE

We know what came, but how many of us would have foreseen what was coming, and acted in time? Rosi’s father, having read Mein Kampf, did. Immediately after Hitler’s election, he began pleading with Berta to liquidate their substantial assets and emigrate with their children to America. Instead she continued traveling to Berlin to visit relatives and spend her rental earnings.   Like so many, at every worsening stage she believed the situation would soon be reversed–until Germany annexed Austria and the Nazis stood literally at her doorstep.  At least she had earlier agreed, if reluctantly, to Nathan’s fortuitous insistence they purchase land in Haifa, Palestine.  There they constructed an apartment building, reserving one unit for themselves.  It became the haven they later needed when expelled from Vienna, stripped of resources and forced to leave Rosi behind on her own. 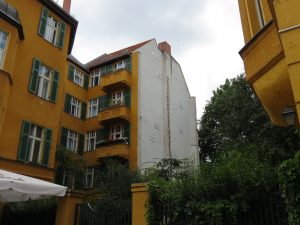 Today Berliners live surrounded by a multitude of Holocaust memorials continually reminding them what occurred (or allowing them to become oblivious to what is so prevalent it ceases to be noticed?).  They refer to the atmosphere produced by the abundance of commemorative installations “the presence of absence,” a thought-provoking confrontation with what was destroyed, what remains missing.  And so the Empty House Memorial, the breach where a residential building once stood.  The wall it shared with its neighbor remains open to the air, names of residents forcibly removed from the no longer existing apartments identifying corresponding spaces on its white surface. 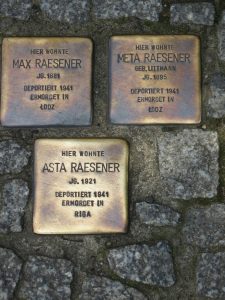 And the stumbling stones, small brass tablets imbedded in the sidewalks memorializing individuals removed from their homes or places of work. Numerous in what had been a Jewish neighborhood, they can especially stop a pedestrian mid step when s/he “stumbles” upon them unexpectedly in other parts of the city–the whole idea–and in the act of reading the inscriptions, bows the head as though in respect and prayer for the deported and deceased.  And the fitting repudiation of the savagery recalled in the empty bookshelves memorial chillingly accompanied by Heinrich Heine’s quote (see previous post): booksellers who daily set up their offerings in the courtyard fronting Humboldt University, directly across the main boulevard from Bebelplatz.

Among the ingeniously creative tributes, The Garden of Exile in Daniel Libeskind’s addition to the Jewish Museum, and The Memorial to the Murdered Jews of Europe, consuming a huge square directly behind the American Embassy and within steps of Brandenburg Gate, induce visceral feelings of disorientation and unease. Designed to give a sense–and it can only be a vague sense–of what the victims experienced, they are sometimes literally nauseating.

But back to Windscheidstrasse. It turned out to be much further out of the way than it appears on paper, which meant I was extremely late heading back to my hotel in the historic eastern heart of Berlin. Beyond the range of a reasonable taxi fare, too far from Ku’dam to return to it for a familiar bus route, I had no clue about other public transport options.  In addition, I’d been quenching the thirst roused by my fast-paced clip and, frankly, so badly needed a facility feared I wouldn’t make it to next corner.  I’ll spare you the whole sequence and just say that finally I happened on one of those modest European hotels with a ground floor lobby and, crucially, unlocked front door. 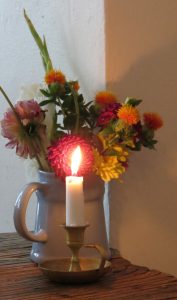 A bit of illumination at Cafe 1900, a gem found through above-and-beyond assistance from strangers

The reception clerk had never heard of The Regent Hotel but kindly directed me to the downstairs restrooms. When I returned to the desk, he presented to me (not a guest of his establishment) a two-page printout of step-by-step directions–the location of the U-bahn station, which train to take, where to transfer. . . and happily changed my large Euro note for bills acceptable for the ticket machine. The gracious assistance, the sort of hospitality unfailingly extended in Italy but thoroughly unexpected in Germany, astounded me. (And it was not the only instance during my stay of people going out of their way in ways well beyond perfunctory courtesy.)

Perhaps my preconception was mistaken. Perhaps the generosity is among the paradoxes of the place that make Berlin a rewarding (if sometimes unavoidably disturbing) destination–paradoxes like the plethora of purposeful reminders of the past that can be rushed past without notice, that ever-present absence. Or, I wonder, did it emerge from a concerted civic effort, what Jews recognize as a crucial part of the atonement process: acting properly when faced again with the situation that requires amends. More important than the reason or genesis, of course, remains the greatly appreciated simple act that creates a positive connection between people, a spark of good that makes the world a little brighter.