The Horned Prophet and Other Divine Lights 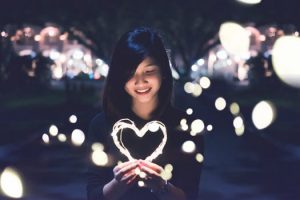 What do you think when you see someone whose face is aglow? Often that special shine is attributed to pregnancy. Or love. Some attribute it to positive energy, goodness, a greater than normal happiness. Or indication of a particular kind of inner light, what we might call spirit. 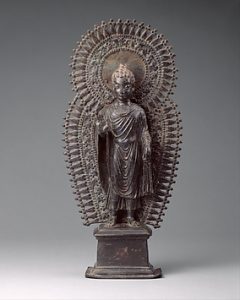 Today, Easter Sunday, and midway through the eight-day celebration of Passover, I’m particularly thinking about how religious traditions the world over refer to their founders, saints, leaders and clerics as “enlightened ones,” and depict them surrounded by or sending out discs and shafts of light.

Perhaps the most famous shining face in history belongs to the hero of the Passover story, Moses, the Jew rescued from the Nile when an infant by Pharaoh’s daughter, raised as a prince, Divinely directed to lead his enslaved people to freedom and the place promised to them as their eternal homeland.  At one point while the Israelites were en route through the desert, when the prophet returned from his second ascent up Mount Sinai. “–with two tablets of the Testimony in the hand–Moses did not know that the skin of his face had become radiant when He [God] had spoken to him” (Exodus 34:29). 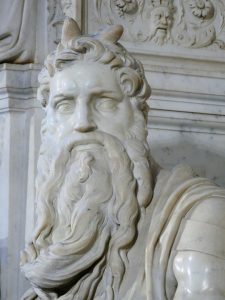 We’d probably be less familiar with this detail had Michelangelo not included a particular feature in his sculpture of the biblical figure housed in Rome’s church of San Pietro in Vincoli (Saint Peter in Chains). From the otherwise magnificent head of his Moses sprout two horns. You’ve probably heard the prevailing explanation for the troubling addition: the result of a mistranslation of the original Hebrew (beam or ray [karan] of light) into Latin (horn [karan] of light). Except perhaps it did not.

Poor maligned St. Jerome, who translated the Old Testament into Latin in the fourth century. He actually was an accomplished linguist, fluent in Latin, Greek and Hebrew.  I wasn’t able to directly access his commentary on Exodus explaining his word choice, but reportedly it was purposeful.   In ancient use the horn symbolized power, even divine power, and authority. Great conquerers like Alexander the Great and Attila the Hun wore horned helmets. (Brunhilde, the fierce princess of Norse mythology, also comes to mind.) 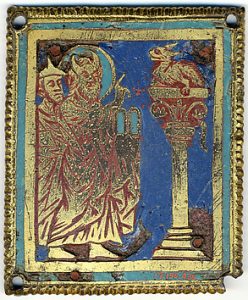 By Michelangelo’s era the horns held a negative, demonic connotation. (Unfortunately, not even modernity erased the belief that Moses, and his co-religionists since, literally had/have horns. My sister recently reminded me that when she lived in California in the 1970s, she told a co-worker her religious affiliation. “But you can’t possibly be Jewish,” the co-worker insisted. “You don’t have horns.” ) To think of the greatest of Old Testament (Jewish) prophets as an animal, or even better the Devil, served the purposes of anti-Semites. (Never mind that the Bible clearly states beams or horns–projections of some sort–of light–and that the light was coming from his face, not his pate.)

The theme of light, and its opposite, occurs several times in the Exodus story. Moses first encounters God manifested in the Burning Bush, a plant aflame but not consumed; in other words, emanating heat and light without being diminished.   And after the Israelites escape from Egyptian bondage, a pillar of fire comforts them and provides illumination to their camp at night.

Between those two come the Ten Plagues meant to show the Egyptians where true power resides and convince Pharaoh to let the Jews go already! The next to the last is darkness, a three-day obscurity that could be felt (Exodus 10:21-23).   I never fully understood what this meant until the morning during my first visit to Israel when my father and I prepared to climb Masada (the plateau above the Dead Sea that was the last stronghold of the Jews against the Romans in their first-century conquest of the Holy Land).   We had stayed at a small hotel in the vicinity in order to begin the trek (in those days only possible via the narrow aptly named “snake path” on the eastern side) around four o’clock in the morning; we had to beat the sun to the top in order to avoid scorching temperatures en route, and to witness its rise above Jordan’s dusty lavender Moab Mountains.

But when we exited the premises, we could see nothing. Literally nothing. Total black. We sat in our rental car staring into the void for a good fifteen or twenty minutes, waiting for our eyes to adjust. 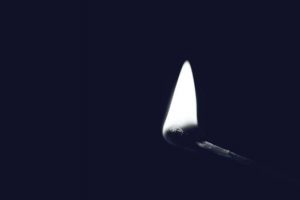 In the Torah, no one moves because, being unable to discern anything even right before their eyes, it is unsafe to do so. We are to believe the condition was literal. It was also metaphorical, a reflection of the Egyptian belief system, of a condition that made the people blind to others and things in their environment that could be of help and comfort. Even though at this point in the story Moses has yet to acquire his glow, he has seen the light. 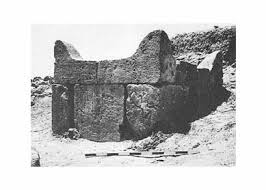 In his defense of Michelangelo’s depiction of the hero, Dr. Taylor Marshall  connects the horns (karan) of light with the horns (karan) projecting from the corners of the altar to be built by the Israelites (according to specific instructions given to Moses by God) and by association, Moses’ face and the platform where sacrifices would be offered (a way for the people to draw close to God–the meaning of sacrifice). He also suggests that Michelangelo, despite his immense talent, was incapable of sculpting rays of light from marble. But rather than carving animal horns, the ones with which he adorned Moses’ head stylistically resemble the tablets containing the Ten Commandments. 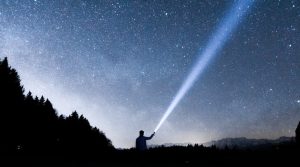 I find this last part a stretch. I’ve seen both animal horns in the shape of Michelangelo’s, and another statue sporting quite lovely carved beams of light.   But I would like to believe that, rather than perpetuating a vicious characterization, even if based on mistranslation, Michelangelo chose to use St. Jerome’s metaphor; he wanted to portray the authority conferred on Moses (and, based on the expression on Moses’ face, the weight that authority imposed on him). And with a little twist, I like the idea of the tablets emanating from his head, the eternal gift divinely dictated or inspired, the most brilliant guidelines for a good life ever presented to humankind.